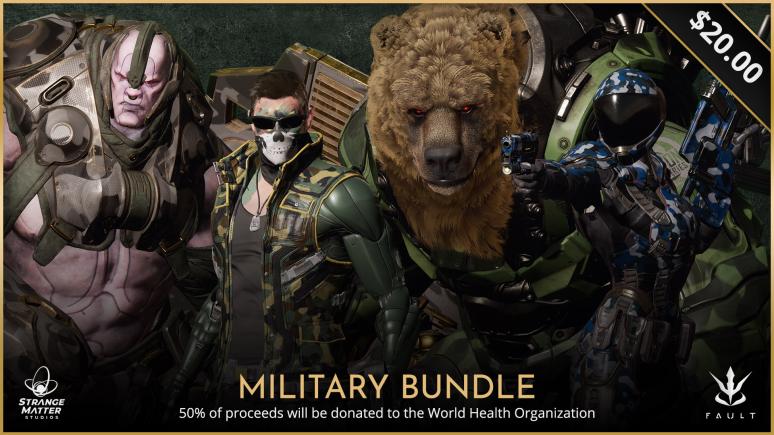 The COVID -19 pandemic has affected the studio that is working on the Fault project, a Paragon (created by Epic Games) inspired third-person MOBA.

“Strange Matter Studios have been working hard to make sure that Fault’s Early Access is as good as it can be. Unfortunately, we have faced production setbacks due to the recent global pandemic and we will not be ready for Early Access come May 8th.”

However, this has not stopped Strange Matter Studios from persevering through these difficult times. They have continued to work on the game while still maintaining a strong and active community that is eagerly awaiting the release of Fault’s Early Access on Steam at a later date. Soon™.

“The SMS team has felt the repercussions of COVID-19. In order to help the fight against it, we will be donating 50% of all proceeds from the Military bundle during Early Access to the World Health Organization (WHO).”

See The 4 Charity Bundle Skins Down Below:

Twinblast is reinvented in Fault in a harvest background where he looks less guerrilla and more like a militia bandit set in the universe of the Faultline.

Next up is the brand new skin for everyone’s favorite robotic Support/Jungler, Tank Steel!

Hardened with gold detailing and a sleek forest green camouflage, Steel is sure to inspire and make even the feeblest of allies feel unstoppable.

Boris leaped onto the scene as the third skin in the charity bundle as the fierce Military Boris! We were able to pull Boris aside during a match to get this exclusive comment from the mechanic mammal himself:

Also, be on the lookout for Boris’ new Lumberjack skin as well to make sure you’re looking your best on the battlefield

The final skin to be revealed for the charity bundle was Commando Lt. Belica, perhaps leaving the best for last! Belica is sporting a watery camouflage on her and her drone, as well as a brand new mask to intimidate enemies on the battlefield.

In addition to looking awesome, it’s good to see both Belica and Twinblast taking effective health precautions with their masks!

We spoke with a SMS representative asking if these skins will be limited time only and they had this to say:

“I would expect the skins would be available for the duration of this current global situation. Though if they’ll be removed after that point I am unsure.”

50% of all proceeds from this bundle during Early Access will be donated to the World Health Organization (WHO).  The total cost for the Military bundle is 20 dollars USD.

Don’t miss out on this fantastic opportunity to both score some awesome skins for Fault, as well as help donate to charity in need during these stressful times.

*Please Note* Strange Matter Studios is an indie company that has multiple departments within their development team. This means that while still advancing the gameplay, they continue to create more skins and unique ways to support project Fault and the current global crisis.